Do you know what I discovered this week?  I need a break!  I’m about to lose my mind.  Between all things Trump and trying to write my third book (over halfway finished), I am worn out.   I’m getting hives, I don’t sleep, my blood pressure is climbing, I’ve got a permanent nervous twitch in my left eye, and I am overeating from the stress as if every day was my last meal before Armageddon.   I tried to watch the Olympics to take my mind off my worries, but as the song says, “I felt nothing” during the opening ceremony.

I don’t know about you, but after the brilliance of the Beijing 2008 and London 2012 opening ceremonies, seeing Rio’s opening ceremony done on a shoe-string budget was vastly underwhelming. Giselle Bundchen, a white, blue-eyed blond German, taking her last long-ass cat walk as one of the top highlights of the night was definitely a huge yawn and slightly agitating.  All I could think about was Brazil’s problems with “whitening” and their issues with miscegenation, and it just made me sad for “the African and Amerindian descendants—many who live in poverty.  I couldn’t set aside the Zika threat that will deform millions of babies in a predominantly Catholic country that is against abortion but squandered any national finances that might help these poor kids, and that the perverse corruption, the pollution, and the vulnerability of our athletes to terror threats all hovered like storm clouds over Rio—the thought of it was too much for me to fully relax.  The world is in such a mess, and watching the Olympics in Rio didn’t make me happy, it just reminded me that our entire Earth is one giant ball of murder, mayhem, and chaos, and there is nowhere to run—nowhere to hide. 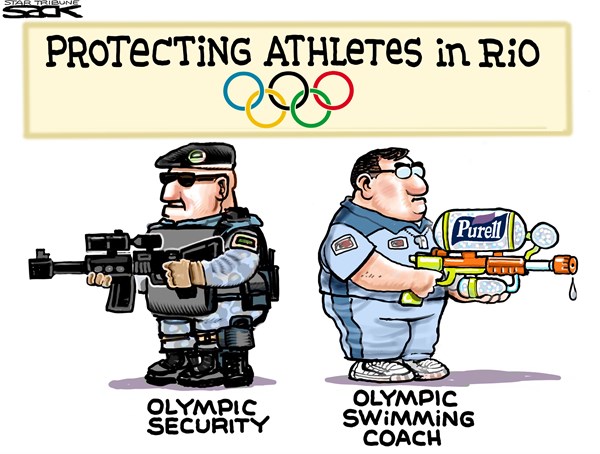 So I pushed aside the dull Olympics (except for Simone Biles—I do so loves me some perfection in motion) and thought about what I really needed to perk up my spirits.  And it hit me like a ton of bricks:  I needed family—I needed me some grandson time!  So I sent my seven-year-old grandson a text and asked him if he’d like to come down for a visit for a couple of weeks.  He said he would love to, especially if he could sleep in his super-hero costume every night, go to Busch Gardens every day, and have lots of pizza, spaghetti, and cookies without interference from The Mother when he came to visit.  I said, “Sure, what are grandmothers for, but to stick it to their daughters as payback for all the grief they caused when they were teenagers!” (Judging from the picture he sent me in response to my text, he was having issues with The Mother that day.)

Then I started thinking:  wouldn’t it be fabulous to have a family reunion?   To surround myself with what is important in life and to forget about the consummate assholes in our world for a time—from ISIS to Donald Trump.  So I called up my other daughter and her dog, Wednesday Addams, my sister and some extended family and invited them all down next week. 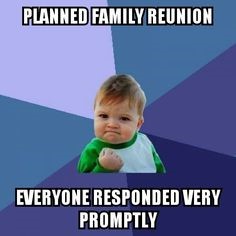 So I’M TAKING A BREAK!  I won’t be blogging for a few weeks, but I’ll be grilling ribs and chicken, baking cakes and pies, playing family games and laughing my ass off while drinking copious wine, as well as suffering through Busch Gardens for the sake of my grandson.  While I’m gone, please keep an eye on things for me—especially that rodent from another planet—Donald Trump.  I am convinced that I feel a shift in the winds of his fortunes, but anything can happen to reverse the tides.   I’m a prayin’ woman, and God don’t like ugly which means I know he’s answering my prayers to crush Trump’s sorry ass.  I don’t want The Donald to simply lose; I want a tsunami to bury his punk-ass and all the ignorant racists who lay claim to him.  This fascist spirit must never rise again!  But it ain’t over yet, so keep watch and stay vigilant.  If things start to get crazier, send me a note or give me a call, and I’ll get back on my knees and start praying again. In the meantime, below are some cartoons to keep you informed regarding the task at hand—defeating Trump.  Should you miss me or you become dismayed at the election mayhem, cut out one of these and paste it on your refrigerator to give you strength and renewed vision.

CARTOONS TO LIVE BY WHILE I’M GONE!

SINKING SHIP CARD:  Cards to send to Trump when he officially loses.

DAY OF REMEMBERENCE (July 29, 2016) CARD—the day Trump lost the 2016 election: The moment the Kahns challenged Trump’s racism and lack of sacrifice in the memory of their Gold Star son (“Mr. Trump, you’ve sacrificed nothing; you’ve sacrificed no one”), and Trump spent four days attacking the Kahns instead of humbly kneeling in their presence. 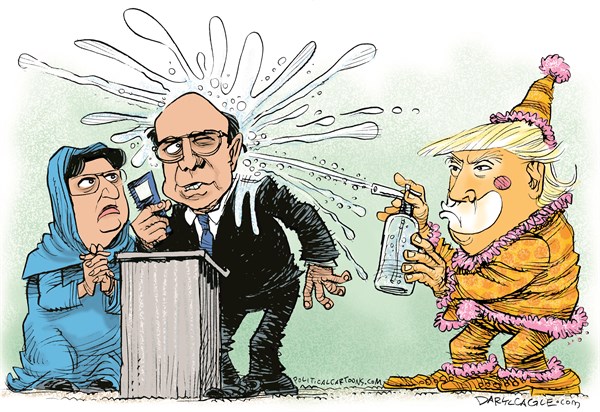 WUSS CARD:  Send every time Trump complains that election is rigged just because he can’t handle losing to a girl. 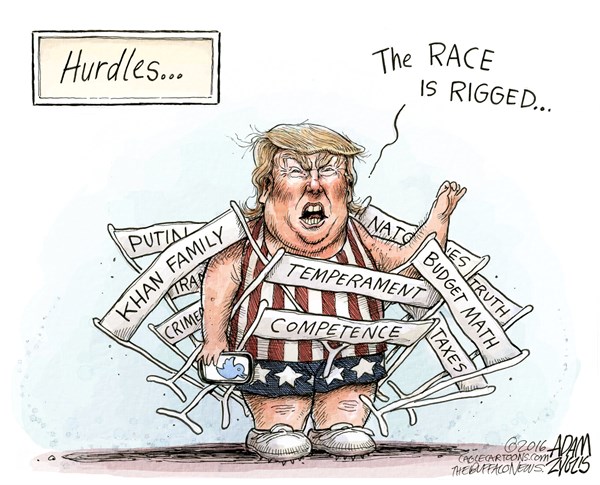 OH, “HELL TO THE NO” CARD:  The day you realize how badly the next generation has been affected by Trump’s racist mouth.

WORDS MATTER CARD:  To be sent to Trump, his handlers, and apologists who say that Trump’s dog whistle challenge to his 2nd Amendment base to assassinate Hillary Clinton or the Supreme Court judges she picks was a joke.  Let them know in no uncertain terms that “words matter” and those particular words were not only dangerous, but intolerable, and his flippant mouth is going to get somebody killed.  Tell Trump and friends to ask Yigal Amir, Yitzhak Rabin’s (Prime Minister of Israel) assassin whether words matter.  Amir was inspired by the unchecked, heated, political rhetoric to kill Rabin in 1995 for his peace negotiations with Palestinian leader Yasser Arafat.

LOCK HIM UP! CARD:  The day you realize that Donald Trump is mentally ill, that Karma is a bitch, and that what goes around comes around—like his campaign rallies shouting about Hillary, “lock her up!”

I am discovering that I’m even out of pithy quotes to give you, so I’m leaving you with only a definition.  Whichever presidential candidate fits this shoe, then put it on him and don’t turn your back on him for a New York minute, or he’ll end up kicking you in the ass for four years and counting.

“Narcissistic personality disorder is a mental disorder in which people have an inflated sense of their own importance, a deep need for admiration and a lack of empathy for others. But behind this mask of ultra-confidence lies a fragile self-esteem that’s vulnerable to the slightest criticism.”—Mayo Clinic Staff/Mayo Clinic Website

“YOU HAVE SHIT FOR BRAINS, AMERICA” CARD:  The card to send on November 9th to the American electorate who voted for Trump, should he become President.

NOW I’M OFF TO GO SLATHER A BUCKET OF SAUCE ON COPIOUS RACKS OF RIBS AND MAKE A BATHTUB FULL OF POTATO SALAD!  SEE YOU AT THE END OF AUGUST!

MY EXPRESSION WHEN MY WONDERFUL FAMILY ARRIVES TODAY, FRIDAY, SATURDAY AND SUNDAY

WANT TO KNOW MORE ABOUT THE AUTHOR?  Check out www.eleanortomczyk.com

WANT TO READ THE AUTHOR’S LATEST BOOKS?  Monsters’ Throwdown and Fleeing Oz are both on sale at Amazon (Paperback and Kindle).

Unauthorized use and/or duplication of this material without express and written permission from this blog’s author and/or owner is strictly prohibited. Excerpts and links may be used, provided that full and clear credit is given to Eleanor Tomczyk and “How the Hell Did I End Up Here?” with appropriate and specific direction to the original content.

Posted by etomczyk on August 10, 2016 in Uncategorized

This site uses Akismet to reduce spam. Learn how your comment data is processed.