Do you know what I discovered this week? I would love to chat with Dr. Martin Luther King, Jr and let him know that I am one black woman in America who has been living the dream for quite some time now. So much so, that the only problems I have are white people problems, which is amazing given the background I’ve come from. In my memoir, Monsters’ Throwdown, I vividly described living through the Jim Crow era as a poor black child, and it was a bitch! It’s a good thing Dr. King came along when he did or I would have been burnt toast. I’ll tell you now, I was not cut out to suffer. Let’s just say, I’ve been rich and I’ve been poor—rich is a hell of a lot better.

Since I can’t see Dr. King face-to-face at this point, maybe I’ll write him a letter. Yeah, that’s exactly what I’ll do. I’ll bring him up to date as to what’s happening in my life and the general state of affairs on the Earth vis-à-vis his legacy.

The main problem I had this month—E. Tomczyk

Hope all is well. But of course it is, because compared to Earth, I am sure Heaven is a walk in the park. Did you just flip when Mahalia Jackson sang her way into Glory shortly after you did in 1972 and when Maya Angelou strutted her stuff through the pearly gates this past year? I can almost hear the three of you civil rights icons harmonizing on “Just a Closer Walk with Thee.” And what was the look on Strom Thurmond’s face in 2003—that old humorless racist from South Carolina—when he saw you laughing it up with Jesus, et al? Did that staunch segregationist tell you that he had a secret bi-racial daughter that he fathered with a sixteen-year-old maid in his house when he was twenty-two-years-old? (Nowadays they’d call that statutory rape.) Of course, it must have been so exhilarating to see your wife, Coretta, again in 2006. She did a great job in carrying the torch once you’d gone, Martin. You would have been pleased at how she preserved your legacy. (Now your kids, they are a horse of a different color, but I’ll tell you more about them later.)

Dr. King, I have been living the dream! First of all, I got a great education—it wasn’t easy—but I worked my ass off to get my degree. I was one of the first to go to college in my neighborhood. I did well, too—even made the Dean’s List a time or two. Then I met this adorable man who turned out to be a white man. Can you believe it? As you know, the Supreme Court didn’t strike down the miscegenation laws until 1967 with the Loving v. Virginia case, but we didn’t meet until 1972. We were pretty much free from any bigotry against our marriage (unless you count my mother-in-law) as long as we stayed out of South Carolina and Alabama, which still kept their miscegenation laws on the books until 1998 and 2000 respectively. There was still a Justice of the Peace in Robert, Louisiana as late as 2009 who refused to marry an interracial couple, but I never had much account for Louisiana and pretty much avoided that state like the plague.

Anyway, I got myself a darling white man. He’s a keeper! You’d be pleased, Martin—he’s so kind. He’s my best friend. I’m sure interracial marriages hadn’t even crossed your mind when you said “I have a dream that one day on the red hills of Georgia, the sons of former slaves and the sons of former slave owners will be able to sit together at the table of brotherhood.” And do you know what we do—this milky-white man and I—to celebrate your birthday? We spend the entire weekend in places that would have, at best, dragged us out by our hair, and at worst, lynched us from a “poplar tree as strange fruit” for breaking the miscegenation laws in years gone by.

I know our first black President says we should spend your holiday weekend in service to others, but I do that all year round anyway. I get way too much pleasure from these traveling adventures to set them aside. This year WW (White and Wonderful) and I plan to go to an antebellum resort that was started in 1778. It has been the vacation site of presidents, judges, lawyers, politicians, and at least one princess. You should see me when I roll up to these places. I’m always dressed to the nines, dripping with jewels (tastefully, of course), and as my husband hands the valet the keys to our car, he extends his arm to me and I loop my arm in his as we stroll confidently and with grace through the front door to the check-in desk. Then I take a deep breath and wait for the line that is always music to my ears: “Welcome, Mr. and Mrs. Tomczyk. It is a pleasure to have you as our guests!” 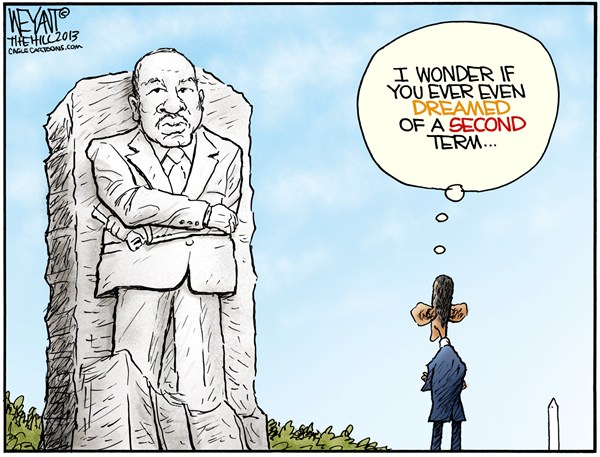 Life has definitely improved since you left us, Martin. More minorities are educated with good jobs, great homes, and doing well. We can eat where we want, live where we want, and vote for whom we want. Our first black President was elected for a second term (nobody saw that coming), and although he has his haters by the truck load, I think he’s going to end his presidency just fine, and history will treat him kindly. Unless you’re watching Fox News and their right-wing bedfellows, the entire world has seen his grace under fire, his self-control, his uber-intelligence, and his compassionate heart. We just have to keep him alive to finish the job. (You know what I’m sayin’.)

Now, I’m not going to lie to you—even with our first black President we still have many, many issues to deal with, and some of them might end up derailing all your hard work and sacrifice. One of them is that our black children seem to either not understand the depth of your sacrifice (and others) or they have been raised in such affluence they don’t see the potential dangers that they could still encounter. Granted it was years ago, but one of my kids announced to me that there was no more racism—her generation didn’t see color (she does have an amazing gaggle of multi-cultural friends). Of course she is the color of vanilla cream, so half the time, people just assume she’s white. She didn’t change her tune until a stranger in an airport bar recently mistook her for being white and jokingly made good-old-boy cracks about how much he was sure they’d both enjoy seeing the President assassinated, as if this was a first-line agenda item on every white person’s list. Sigh!

Other black children have given up on your dream, Dr. King because of the ravages caused by income inequality: eroding public schools, the new slavery (one in ten black men in prison—more in prison than enslaved in 1850), absentee fathers (cause they’re mostly in prison!), joblessness, homelessness, black-on-black crime, police brutality . . . black folks hardly vote anymore because they are so disheartened. We’re losing our youth to drugs, murder, and mayhem, Martin. The black middle-class is melting away and most of our black families are ending up in the 99% of the have-nots because the richest 1% now control 48.2% of the global wealth. How can any of the poor compete with that, no matter what their race?

But the fear that keeps me awake at night is the resurgence of widespread racism. Dr. King the world has gone nuts since you’ve been gone. Religious extremists are bombing here, there, and everywhere. Anti-Semitism is on the rise in Europe—it’s as if all of Europe has collective amnesia. In America there are “angry white men” who have taken up residence in the Tea Party and white supremacy groups because they are convinced that your legacy has made them victims of reverse discrimination. It’s as if they are trying to turn back the clock for minorities, women, and the gay and lesbian population to the 1950s. It’s just crazy-go-bananas in our legislative branches and in the marketplace. Sometimes it makes me want to stand up and holler.

Well, that is the gist of it Dr. King. I could rattle on for days. Pray for us in the hour of our need. The jury is still out as to whether we can continue to live the dream that you so valiantly gave your life for. I’m getting up there in age, so I won’t have to deal with this disillusionment much longer. I’m sure I’ll be seeing you sooner than later. Take care, my hero.

P.S. LATEST CHIT-CHAT: Bill Cosby assassinated Dr. Huxtable and broke millions of hearts; we have a popular TV show where a white president of the United States is having an affair with a kick-ass black woman who is a miracle worker; we have another popular TV show where the protagonist is teaching everyone how to get away with murder; and we have a brand new hot TV soap opera where the cast is 99% black and they are all rich hip-hop moguls (all three shows written by black folks). Dr. Ben Carson, who used to be arguably the best neurosurgeon in the country has lost his freakin’ mind and become a Tea Party darling and wants to run for president. Your grown-ass kids are a HUGE embarrassment (sorry to be the one to break the news)! Dexter and Martin III are trying to oust Bernice as CEO of King Center, and Bernice is counter-suing because the brothers tried to sell your 1964 Nobel Peace Prize (oh, hell to the no!) and your Bible you took with you to prison that Barack Obama swore his inaugural oath on. One of your kids is suing your old friend Andrew Young for intellectual property that he says you and Coretta gave him, and the King kids made DC pay them a butt-load of money ($800,000 I think) to erect a long-awaited statue of you. Also, I heard your Center has fallen into disrepair—algae is growing in the pond which is cracked, and the place is looking real ghetto-like. Looks like your kids aren’t living the dream, either (judging by their character, and all). Kids! What you gonna do?

“I refuse to accept the view that mankind is so tragically bound to the starless midnight of racism and war that the bright daybreak of peace and brotherhood can never become a reality… I believe that unarmed truth and unconditional love will have the final word.”—Martin Luther King, Jr.

“Change does not roll in on the wheels of inevitability, but comes through continuous struggle. And so we must straighten our backs and work for our freedom. A man can’t ride you unless your back is bent.”—Martin Luther King, Jr.

“Man must evolve for all human conflict a method which rejects revenge, aggression and retaliation. The foundation of such a method is love.”

“I have decided to stick with love. Hate is too great a burden to bear.”—Martin Luther King, Jr.

LIKE TO KNOW MORE ABOUT THE AUTHOR? CHECK OUT www.eleanortomczyk.com

Unauthorized use and/or duplication of this material without express and written permission from this blog’s author and/or owner is strictly prohibited. Excerpts and links may be used, provided that full and clear credit is given to Eleanor Tomczyk and “How the Hell Did I End Up Here?” with appropriate and specific direction to the original content.

Posted by etomczyk on January 15, 2015 in Uncategorized

21 responses to “MARTIN, MY MAIN MAN”

This site uses Akismet to reduce spam. Learn how your comment data is processed.